“Today was great. A new place to make new memories. There is only one word that could describe why it was so great—adventure.

Never in my life have I been on an adventure like today’s. Adventure was in every corner, forest, animal, and person. My favorite part of our day of adventure was our first stop at Elmina Castle, a place where people where slave were held for hundreds of years. Taking that first step, I knew we were in for something amazing.

Beautiful architecture was the first thing you saw—arches, white stone, carvings, and to top it off with a cherry, the castle was right next to the ocean. But that’s not all that was special. It turns out that the castle has been there for over 500 years, and we learned all about the history. We went inside dungeons, death rooms, and even the governor’s living space. Creepy? Yes. There was always one surprise after another. Each room was so interesting throughout the day; I thought we’d never leave!

Though many surprises await us in the near future, this one has been my favorite so far. This is definitely one to share with my friends and family back home because it was such a great adventure.”

“When you take that first step on the wobbly canopy plank there are either one or two things going through your head: you’re either scared out of your mind and/or fascinated by the African jungle below. Hanging above the trees while watching the silent jungle bellow is a definite must see.

Though it takes quite the hike to get up to the canopy, not to mention the army ants we had to avoid by jumping over them. One bite from a single army ant and it could be game over, if you’re not careful. After everyone was safely past the army ants, it takes about 20 minutes to hike up the mountain to get to the canopy. Several members of our group went first to take some fantastic pictures, as well as Ms. Debi, who hid between the trees with her camera. Once passing through the canopy and heading back down the mountain, again, everyone in the group bought some cool refreshing drinks and some trinkets at the gift shop.” (See video at the end of the blog) 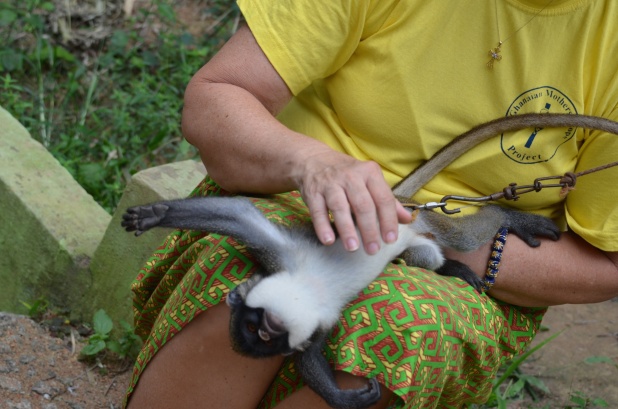 “The Monkey Forest was my favorite place in today’s trip. The weather was perfect with just a little sun and breeze. I saw some of the same monkeys from last year that have grown up, which was amazing to see. All of the monkeys showed 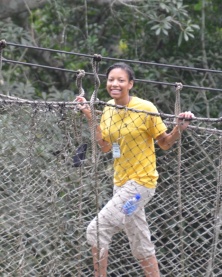 off for us because of all the excitement and people. They were running and jumping from all ends of their cages, and grabbing the arm of the lady who was telling us about the monkeys.

A Dutch couple owns the sanctuary and they run it with so much personal love for their animals; I think that is why I enjoyed that type of interaction with the monkeys so much. The Monkey Forest isn’t like any U.S zoo, with a vast area enclosed with glass only being able to see the animals from a distance. At the Monkey Forest you were able to see all the animals up close and even let one little monkey jump on you. At the end, we walked up another hill, after walking the canopy walk earlier my legs were burning, to go see the mountaintop. There was a great view of the middle of a jungle. It was a peaceful ending to our day.”

One response to “The Great Team Adventures”