First, I am extremely grateful to Church of the Redeemer, Sarasota, FL. Last summer we were in dire need of a vehicle here in Ghana. Our old van just could not make one more trip on the bad road. We really needed a 4-wheel drive SUV. We were able to purchase a used Honda CRV. During the year, Mercia has used the car to visit our various school sites and to serve our sponsored children.

This week we are preparing for the arrival of our mission team on July 28th and our Reading Camp the first week of August. Today we visited several villages that will be sending children to our camp. We have invited 5 villages to participate. Among those 5 villages is the small village of Trewebo. 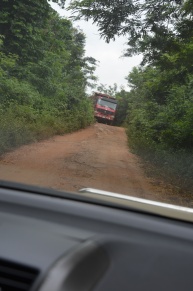 where we host Reading Camp. Our trip there today was quite the adventure. At first I thought, this is great. The road is paved and we have air conditioning, definitely needed in the 90-degree tropical sun. Then we made a right turn and in 10 feet we were out of road onto a single lane, pothole filled, dirt road.

In many places the potholes were more live caves. It got even better when we saw the large, red dump truck, filled with dirt heading towards us. There was no place to go. Both sides of the road were blocked by vegetation. Mercia laid on the horn and finally the truck stopped and backed up. We were able to move forward and found a small outcropping on the side of the road. Mercia squeezed the CRV over as far as possible. I closed my eyes. The truck was so close I was sure they would hit us because of all the holes in the road. Whew! It was a close one and the pattern continued for the next 10 miles; truck after truck. 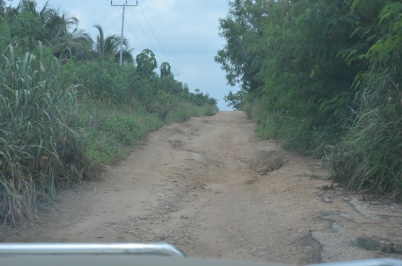 It is sad to see all the big trucks. It means that times are very hard and villages are selling their soil for the cement plants. Trewebo has been an agricultural village. Selling the soil is a new development. Soon they will not have good land for farming and we can already see erosion on the roads. When the heavy rains come there are no plants and root systems to keep the water from running.

Meeting the teachers and children at Trewebo made me smile. Children are really no different from one village to the next. They all want to touch my slightly tanned skin. I love to teach them a few new songs. They could sing Old MacDonald however he only had one animal on his farm and it was a duck. After 3 choruses of quack, quack,  I suggested that he might have had a cow or a chicken as well. We arranged for 40 children to come to Reading Camp. They will hire a tro-tro—the name for a local bus for. The children will need to leave before 6 am to be at camp by 8:30. For many of these children, the bus ride alone will be a big highlight.

After another frightening trip down the Trewebo road, we asked a police officer if we could travel to Akramaman by a back road that was paved. He looked at our vehicle and said it would be okay. He said there were just one or two spots that were bad. HA, HA, HA. According to Webster’s dictionary bad means they failed to reach an acceptable standard. I might have used a little stronger word, like disastrous. At one point we reached a bridge that had caved in over a small stream. We traveled down stream to cross over. We crawled in and out of rock gullies and large water filled holes. It was about a 2-hour trek. I have to hand it to Mercia she was an awesome driver. I on the other hand, wore out my right foot trying to hit the imaginary brake, closed my eyes many times, and made finger impressions in the arm rests.

It was worth the trip. As a bird fancier, I added three new photos to my collection. I saw many villages along the way that people will never see. Sadly, if the roads are not repaired, those villagers will have no way out unless they walk and it is a long, long dusty, hot walk to the closest “city”. To put your mind at ease, the children of Trewebo will not be traveling the road we used today. Except for the Trewebo road, they will take a longer route on mostly paved roads.

To Market to Market

Comments on: "The Roads less traveled" (2)