Dressing up in our very best 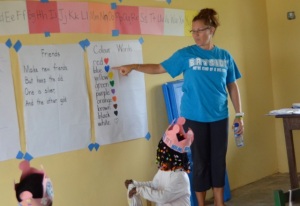 The things I have discovered on this journey that I am surprised about are not the things I  would expected to have had an affect on me. I know this is an area of poverty so seeing the conditions and hearing what these people will never have wasn’t a shock to me. Students I have taught in the past have survived situations that others have nightmares about.

The thing that has tugged at my

heart the most was something I discovered the second day of reading camp. When we arrived at the school in the village on Monday all the children were dressed in their best. There was a distinct difference between the ones who were there for camp and the ones from the village just there to play. They all looked so cute and their smiles were their best accessory.

When we arrived at camp on Tuesday I noticed a few of the children wore the same outfit from the day before. It didn’t occur to me until later that afternoon that dressing so nice on Monday meant they were showing us their very best they had to offer. It is quite humbling to realize that they wanted to impress us and that their “Sunday best” is their only best.

The sad realization for me is that when I was packing clothes for the trip, I went through and packed items that I wouldn’t be upset about if I had to leave here; old shirts that the lettering was wearing off, old pants, etc. I guess in the back of my mind I had

every intention of donating the clothes I brought but they’re still the cast offs that I didn’t want any longer. It overwhelms me to think of the selfish things we think about when we don’t have to worry about our means of survival.

This trip has solidified my want to help others in a way that I never thought possible. I do not have a lot of money to give but I have found that just giving my time to be here with the children or a passing wave to someone when we’re riding through a village can mean more than all the gold in the world. The smiles on all the children’s faces when we show up for camp or the taps on the shoulder so they can show me their answer has made my heart melt and I know I will never be the same again. 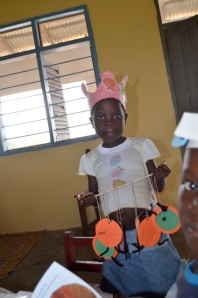 Their desire to learn over powers our superficial needs.

2 responses to “Dressing up in our very best”