We all had breakfast out on the patio and watched 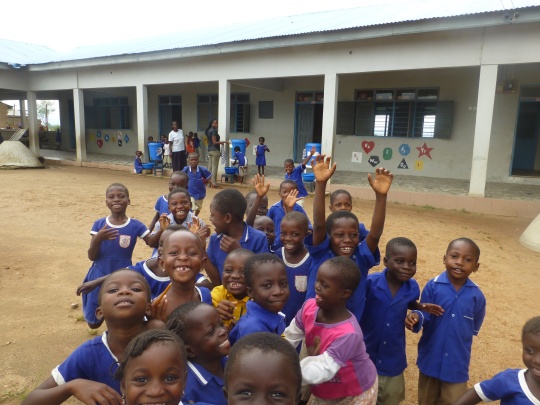 while Accra bustled around us. The bus came to pick us up and we finally headed to the school.  The bus was packed to the roof with suitcases and supplies for camp.  It took us just over 1 ½ hours to get to the school.  Most of the roads were now paved, although we heard that was not true when the school was first built.  We turned on the road to the school and the first thing we saw was the playground.  As we pulled into the yard the director, Anastasia, and all of her teachers poured out of the doors and ran to the bus to greet us.  Each person was hugged and greeted as they got off the bus, what a wonderful welcome!  The first order of business was to empty the bus, unpack all of the supplies and then start sorting everything.

The bus seemed to be a bit of a pied piper.  As soon as we drove through the local villages, people knew that we would be at the school and children started arriving.  At first they were very shy and curious but curiosity won out in the end and they came closer and closer.  Kimberly was a natural with her infectious laugh and they came to sit next to her and then sit on her lap.  The three teen girls were on the playground pushing children on the swings.  Adriana, Zach and Elizabeth were surrounded by children who they met last year and now were admiring how much they had grown.

We were called back to work.  One group of people assembled supply bags for each child so they would have everything they needed for the week.  I headed to the library to level the books that were there and all of the books that we brought with us so that all of the books that were out were camp level.  When I emerged from the library people were scattered all over the place.  Bruce & Scott were working on the playground, Maggie got a soccer game going, Raegan, Elizabeth, and Adriana were on the playground and Debi & Kimberly were singing and playing with children on the porch and there were children everywhere.  If there was any doubt why we were all here in Ghana, here was the reason:  all of those beautiful, hopeful faces.

After a delicious lunch, we gathered as an entire group to go over the curriculum for the all of reading camp so everyone would know what to do.  Each teacher had a Ghanaian counterpart and one of our teenagers to support them in the classroom.  We learned new songs (will the “Beaver song” ever leave my head?!) and poems and finally decided we were ready for the week to come!  Everyone is now anxious for Monday to arrive.

Today marked the beginning of our reading camp.  We have been preparing for a few days and execution went rather smoothly. As soon as we arrived in our bus, we were greeted by all of the village kids.  The playground and the porch were full of smiling faces and bright beautiful eyes that lit up when they saw that we were here to spend time with them.

After assessing the reading skill of the children, they were sorted into one of three classrooms.  I went to collect my kiddos.  They came in with very serious faces and were surprised to see the way the classroom was set up.  They were instantly excited to see the groups of fours that the tables made.

We distributed their book bags, which were filled with school supplies and they opened those bags, as if it was Christmas. Their class day began with reading a poem together. They enjoyed reading it together and then individually.  When they read, it was in unison and there was almost a song-like quality to the sound of their voices.  I couldn’t help but smile widely while listening to their voices, with me occasionally chiming in to reassure them that they were on the right track.

Before we knew it, reading time was over and it was time to head to the library. We formed two lines and we headed to the library.  When the children entered the library, they caught a glimpse of the books and I could instantly hear soft-spoken chatter.  There were about 70 books in this library that’s hardly a library in the United States, that’s actually a book display at a Barnes & Noble.  The children saw the books and were astonished to realize that they could touch and read the books.  Every child got a book and comfortably stretched onto the floor and began looking at the books.

I sat down on the floor and before I knew it, I had a crowd

of students sitting near me.  One of my students, Caroline sat down with me and pulled out a book about the food pyramid.  She looked at me and said, “Madame, can I read to you.” When a little girl as adorable as her asks you such a question, there is no response except a very definite yes.  We began and I glanced over the first page and thought to myself, this book is beyond her level.  She struggled with the first page and then she paused. I thought to myself, she is probably not going to finish this book.  She flipped forward to the end of the page and then softly said, “Twenty one pages.” I work with middle schoolers in the United States and many times when something demands a little extra work, students give up.  I was touched to see her willingness to work hard and her desire to learn more, to be better.  We finished that book and I was so proud of her.  I thought to myself, this is why I came to Ghana. I came to help and to lift spirits.  People always overestimate how much is necessary to make a child smile.  They just want someone who listens, who cares, and who loves them.  Needless, to say it was a great first day. Now on to the next one. J