As ususal, our day begins very early.  We leave the hotel by 6:30 and arrive at the Preschool by 8:30.  Yes, it really does take that long to get from Accra to our destination.  Morning traffic is always hectic and the roads are very bad.

“How to explain the first day at the village? Well for one, the trip was rough. Very rough. You know its crazy when you have to drive into a potholes!   I have to admit the bumps and bruises were worth it!   Seeing the looks on those little kids faces when they saw the color of our skin was amazing.   If you think you don’t like little kids, you haven’t been mobbed by them with complete affection!   They may not understand to well, or speak english at all, but teaching them and helping them so they CAN understand would put a smile on anyones face.    And we all know everyone understand smiles & hugs, no matter what language they speak! ♥”

Yes, we really do have to drive the van into the valley of the potholes in the dirt roads.  We have a very good driver. 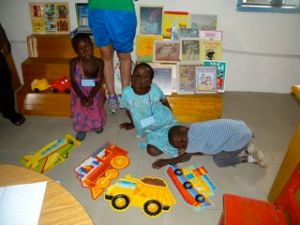 It know it is strange to post two days of “Reading Camp” and yet focus on the health of the children.  I think it has been a great shock to our teens to realize how hard life can be for these little children.  I talked about Victoria and her malaria yesterday.  I am happy to report that her fever was down most of the day.  Today she complained of hunger.  I am sure when her parents realized she had a whole sardine yesterday they felt she would get fed again at camp today.  And they were right.  We gave the kids a wonderful meal of wache–rice and beans with macarel.  I also bought some porridge for Victoria–she is quite thin.  I even got a smile out of her today.

Our classes are moving along nicely.  This morning Maria taught a song to the whole school.  The children sang the Ghana National Anthem (which is sung in English).  They also said the pledge of allegiance.  I think I’ll ask our team to sing the Star Spangled Banner.  Think they’ll know it?

Gail with a few of her students 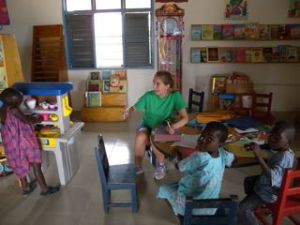 Sara with Victoria, Okailey and Joseph

Now, back to the health of the children.  There are always things that are disturbing.  Parents here really do want the same things for their children that you and I want for our children, but cersomtances are different here.  Every day it is about survival.  That is hard for me after working here for six years.  It can be easy to judge how people behave, but until you can walk in their shoes, you cannot understand.

Ian came face to face with that struggle today.  Before I share his story, I want to assure you of several facts.  No one on the team is at risk for any major health issue.  We think one of the children might be at risk for a Buruli ulcer which is caused by the a bacteria in the same family as leprosy and TB.  It is treatable but is often ignored leading to serious problems including death.  We did speak to the child’s mother.  She claims the injury was due to a fall and that he punctured his leg.  He has not been treated at a clinic.  Our clinic has not opened because we have not raised the money to build a residence for the nursing staff.  It is too far for a nurse to travel each day and a resident nurse would be available 24 hours a day.  I have given money to Moses’ mother to take him to Amasaman for treatment.

I was right there when he notice the wound.  He brought the child to me and then went to get his own medical kit.  I donned gloves and dressed the wound.  You can read more about Buruli Ulcer on my post from July 16.  Also refer to the American Leprosy Mission which has helped with treament here in Ghana. 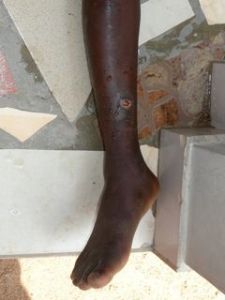 “Today we went to the village again, and I was shocked with the lack of medical attention to the kids.   I was playing soccer with all the young boys when I noticed one of the kids, Moses, had a wound on his leg.   I stopped playing and brought him to Debi and she said it could be a kind of  leprosey.  She told me that he needed to go to the hospital or he could loose his leg and most likely his parents would not take him.  Debi called his parents and had them come.  His mother didn’t seem conserned at all.   I thought that the lack of attention was disturbing because Moses will eventually die from this and no one will help him, not even his parents.”

We are praying that Moses’ mom will take him to the hospital.  Here, when you get sick enough to go to the hospital, it often means you will never return.  This is another reason people are reluctant to seek health care.  We hope in the future, our health post will change the health here and around Akramaman. 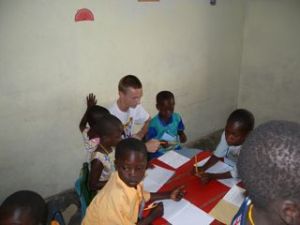 Ian in the classroom

By 2 pm we all settled into the van for the long ride back. After devouring several delicious pineapples–the best and sweetest in the world, most of us closed our eyes are let the rocking of the van put us to sleep.

This bowl was full just a few minutes ago